On the evening of Wednesday, January 6th, members and guests gathered for AWC-SB’s monthly meeting via Zoom. After a welcome from President Lisa Osborn, the Member Spotlight segment highlighted past board member Nancy Seagal.  Nancy’s mission is to help those with debilitating anxiety to regain control and peace of mind in order to have better careers, relationships, health, and the lives they desire. 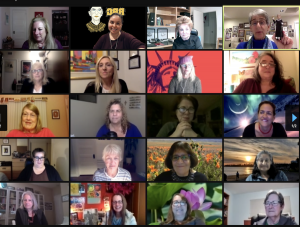 While the disturbing events of the day at the US Capitol were still unfolding, attendees settled in to discuss and learn about someone who accomplished a mind-boggling amount in her decades there, establishing a truly inspiring legacy—Supreme Court Justice Ruth Bader Ginsburg.

The January meeting is traditionally a movie night with film screening and discussion. While groups can’t gather together for a movie now, the assignment was to ‘brush up’ on RBG by reading her biography or watching the documentary RBG in preparation for the meeting.

However, the movie was hardly mentioned as the group was honored with the presence of two special guest speakers–RBG biographer Jane Sherron DeHart 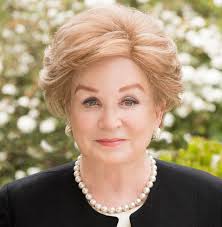 , also a recognized historian and Professor Emerita of History at UCSB, and attorney and recently-retired California State Senator, Hannah-Beth Jackson.

Ms. DeHart’s biography, Ruth Bader Ginsburg: A Life was published in 2018, the same year the documentary film was released. Her book has received popular and academic acclaim, hailed as “monumental,” “compelling,” and a “vivid account of a remarkable life.” Heartbreakingly, the manuscript was lost when her home burned in the 2008 Tea Fire, requiring her to rewrite the entire book.

Those gathered were treated to fascinating tidbits from Ms. DeHart’s time with RBG—did you know Ginsburg served as a mentor to NPR’s Nina Totenberg? It was also noted that with her soft and well-considered way of speaking, she had a gift for educating her male colleagues without antagonizing them.

Ms. DeHart also shared some of Justice Ginsburg’s memorable turns of phrase. In deliberations on same-sex marriage, when asked if same-sex couples could be satisfied with civil unions, RBG replied, “Oh, a skim milk marriage?” Another historic quote of hers regarded gutting the Voting Rights Act of 1965: ”It’s like throwing away your umbrella in a rainstorm because you aren’t getting wet.”

Lois Phillips offered that RBG believed in getting to the point so that your message is clear. “Don’t write sentences that people will have to re-read,” she quoted RBG as saying. “Same is true of public speaking.”

At this point, participants went into breakout rooms in small groups for a few minutes to share ideas on what elements of RBG’s communication style they would like to adopt. 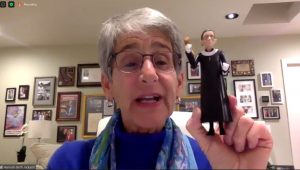 Hannah-Beth Jackson then took the floor, a former prosecutor and practicing attorney, educator, and small business owner. She was elected to serve and represent Santa Barbara County and western Ventura County in the California State Senate in 2012 and continued to serve as our state senator until her retirement at the end of 2020.

Ms. Jackson recalled that when she was at Boston University School of Law, she took the course based on RBG’s treatise, “Women and the Law.” Graduating from law school in 1975, nearly two decades after Justice Ginsburg, Ms. Jackson shared that she held incredible respect and awe for the great change RBG affected for women in her career. She also recounted proudly that she was known by some on Capitol Hill as “the Notorious HBJ” and that she kept a figurine of RBG on her desk as inspiration.

When asked what she thought RBG’s reaction would have been to the violent mob storming the Capitol building, Ms. Jackson replied, “I have no doubt she would have called out Trump and chastised those undermining the rule of law and democracy itself as a great threat to law and order—the basic principles and functioning of our great American traditions.”

And it’s not over until the door prize is given out! A random drawing was done for a Notorious RBG jigsaw puzzle, fittingly won by attorney Catherine Swysen, past President and Board member of Santa Barbara Women’s Political Committee. 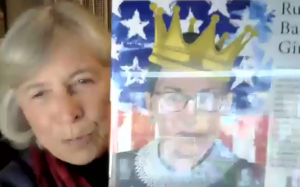 Congratulations to Catherine, and special thanks to our AWC-SB Membership Chair Carolyn Jabs, who donated this fun drawing prize she purchased at Santa Barbara Gift Baskets.

Join us for next month’s meeting, “When Bad Things Happen: Preparing and Managing During a Crisis,” on Wednesday February 3rd at 5:30pm.

Justine Sutton graduated from UCSB and has adopted Santa Barbara as her hometown. She’s a freelance writer, certified in Weddings and Funerals as a Life-Cycle Celebrant® and is currently training as a voice actor.