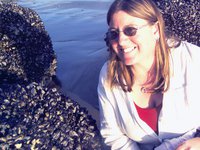 Lisa Angle always had a vivid imagination, probably spawned from watching too much television, while growing up in Santa Barbara, California. When in high school she became interested in computers while taking a Basic programming class taught on Commodore 64s. She went on to earn a master’s degree in Computer Based Education from Cal Poly, San Luis Obispo.

But technology didn’t fulfill her creative spirit, so she began writing fiction and won First Prize in a CWC short story contest in 1993. She became involved with SLO NightWriters, and served as President from 1997 to ‘99. While living in San Luis Obispo she did marketing for the SLO Art Center, taught creative writing at Cuesta College, and received a grant from the SLO Arts Counsel to write and produce a children’s play.

Since moving back to Santa Barbara in 1999, she has worked as stage crew for Ensemble Theatre, and written articles for Montecito Journal, The Independent, and Examiner.com. The opening of her book, Whiskey and Old Stogies won Honorable Mention in Byline First Chapter of Novel Contest in 2001. She’s currently Vice-President of the Screenwriters Association of Santa Barbara.

Technology is still a large part of her life. She has taught computer classes at Santa Barbara Adult Education and Braille Institute. A weekly online newsletter for the Santa Barbara County Film Commission (2004-08) was just one of the websites she’s created and maintained, and she’s become adept at building community on Facebook, Twitter, and other social media outlets. As a Production Assistant at The Santa Barbara Channels, she learned video production, and has produced videos for Women in Communications, the SB Zoo, and the SB Writers Conference.

Her love of the ocean and the outdoors is enriched by her involvement in the Channel Islands Naturalist Corps. As a part of this group she has lead hikes on Santa Cruz Island and talked to passengers on whale watch boats.