Since Perry Norton moved to Santa Barbara and began her career as a voice-over narrator, engineer and editor for her company PanRight Productions, she’s gotten quite a lot of exposure. 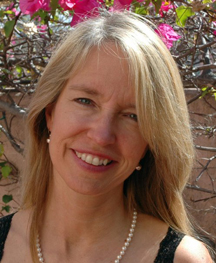 “You may have heard my voice as a talking dachshund, a laughing pig, an alarm clock, the voice you love to hate for countless ON HOLD messages (including Barnes and Noble), as well as video game heroines and villains,” she told me.  “I’ve sneezed and coughed to the tune of The Blue Danube Waltz, read entire textbooks as well as kids’ books for the iPod, and provided audio-training for everyone from members of the National Notary Association to surgeons learning to use new tech devices. My latest adventure is narrating a ‘true crime’ series called Cold Blood for the Discovery Channel.”

Perry began PanRight after leaving New York City in 2001 where she’d lived for 22 years. She experienced the trauma of 9/11 up close as a volunteer for the Red Cross and as someone who lost friends and neighbors.  The event hastened what she knew was an overdue change. At mid-life (45), she left her home and a 10-year relationship to venture West for a new career and life. Through a series of luck and synchronicities, she landed in Santa Barbara after investigating a possible career in the wine industry, one of her many passions. A college friend suggested she try Santa Barbara, and so she did.

“I put it out, and the universe responded,” she said appreciatively, when recounting the people and opportunities she met up with in her journeys.

She started out back east in the DC area where she’d grown up. She’d attended the University of Maryland as a theater major before she  studied and worked in New York City. Perry was heavily involved in music, TV production and media. “I’m a former guitarist (electric) and singer/songwriter,” she mentioned. “I performed in bands at the top NY clubs in the 1980s and fronted my own band before leaving the music scene. Those were some of the happiest, most exciting and creative experiences of my life to date.”

Starting anew in Santa Barbara, she first worked for the Rehab Institute of SB, then for SONOS, a music tech start up.  But the stress from the 9/11 ordeal and other private, very difficult experiences finally caught up with her. Diagnosed with PTSD, she needed to find a less stressful, more controlled environment in which to earn a living.

In 2004, technology and fate converged, and she started her own business with the help of her neighbor who had an at-home music studio he let her use.  By 2005, business was really rolling.  “The digital transformation of everything completely changed the old model/paradigm of the voice-over industry, making it very easy to reintroduce this into my life as a career after a 20 year hiatus,” she explained.

Today, that neighbor is her partner, whose support was key to her making the transition and building a successful business. “Now, I can work from a home recording studio and do all the recording and editing myself.” Her business also affords her more time to do other things she loves, like going to Napa twice a year to attend wine tasting events and festivals.

Another key to her successful transition has been her 4-year membership with AWC-SB, where some of her repeat clients first found her.  Even more than the business, though, she said, “I met all my current friends at AWC and so enjoy the camaraderie of like-minded people. AWC has helped me get grounded in both my business and my social life.”

Perry’s clients include Gallup, NPR, Target, McGraw-Hill, NASA, AT&T, Pfizer, Bank of America, the US Air Force and the American Nurses Association.  She’s been a Producer  (Sci-fi Channel, USA Networks) and Associate Producer (NPR), as well as a Copy Editor for  RiverLee International, MNS Engineers and NPR. Recently, Perry contributed her time to our chapter, working pro bono with Board member Lisa Angle; together they produced a wonderful PSA for AWC-SB’s June 6 Women of Achievement event.

You can hear Perry’s voice samples at www.perrynorton.com and find out more about her services at www.panright.com. In addition to voice-over services, she supplies audio production and editing, remote interviews, podcast production and music supervision for clients across all industries.

Don’t forget to say hi to Perry at the next AWC-SB meeting!